Do you have a child with Developmental delays? Are you struggling to know if your child is on track? Do you just not know where to turn for help? I want to share with you a story about our little Jade Louise. Maybe you will be able to relate, or maybe I will give you an idea of where to look for resources, or maybe you’ll be able to feel better just knowing that you aren’t alone. Jade Louise turned two last September. I knew she was behind, because she has two older brothers and she started doing things a LOT later than they did, but I just kept trying not to compare because each child is different. It was when school started back up last fall and I realized all the kids her age and YOUNGER were speaking in 2-3 word sentences and my daughter still wasn’t doing more than 3-4 words period let alone putting them in sentences. Not only that, but she was terrified of stairs, she wouldn’t even try to climb up or down, she didn’t have any desire to climb out of her crib (her brothers were both in toddler beds by this age, because we couldn’t keep them in the crib–they’d just climb out), she couldn’t throw or catch a ball, was still rather wobbly on her feet and a lot more. It was then that I figured something needed to be done.

We are part of the local Parents as Teachers program, where a trained worker comes to my house once a month and checks in on Jade’s progress and gives me developmental activities to do with her. So the next time my worker came to my  house, I voiced my concerns and she helped me get in contact with our local Infant and Toddler program. They set up an appointment and evaluated her. We discovered she was 9 months behind in communicable language and 11 months behind in comprehension language and was 4-5 months behind in her gross motor skills. She was accepted into their program and we now have a speech/language therapist come once a week to work on her progress and give me help on what to do with her daily to encourage her to talk. My Parents as Teachers worker is really helping me with Jade’s gross motor skills. 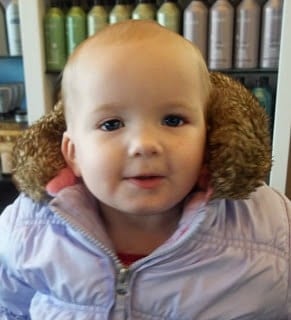 Jade has made leaps and bounds since September; but  yet, as the parent it still seems to drag on and I still see a long ways to go. Jade has since learned how to climb up and down stairs and sometimes she will walk up the stairs if she is holding my hand, and she will sometimes throw a ball. She is now a climbing little monkey even though she still doesn’t climb out of her crib; although this may be a very nice thing as her communication is still quite lacking, and she doesn’t have the comprehension to understand when we tell her to stay in her bed.

In Jade’s speech therapy we have worked with the “wait time” therapy. Basically, if she wants something, we try to help her understand she can’t get it without making some communication that she wants it. At first, because she was so very far behind, our goal was merely to get her to acknowledge the item she wanted by pointing, getting our attention, or anything of that sort. It only took her 1 week to figure it out that if she informed us she wanted something, instead of just throwing a tantrum, that she would get what she wanted. It worked like a charm!

The next step was to then make her give more effort before she got the item. This time, since she already knew quite a few signs from sign language; she then had to make the sign for the item she wanted before we would give it to her. The key to this is to never show her, “no, you can’t have it  until you say it”…but to always be encouraging, handing her the cup of juice or the string cheese, saying, “YES! You can have the drink, as soon as you say it…” and never pull the item back. But the other trick is simply to not let go of the item either until she makes the sign for the item. As soon as she signed “Drink” or “cheese” or “eat” she would get the item she wanted.

It was a long week, but she eventually came around and started signing a lot sooner. So that took us to the next level. This time she then had to make some kind of verbal sign she wanted something instead of just signing. We had gotten to a point where Jade knew she didn’t have to talk, all she had to do was sign. And she is smart enough and stubborn enough to work that to her advantage, so she stopped jabbering altogether! Two steps forward and one step back! So that is when our therapist knew it was time to no longer let her have things with signs alone, but to insist that she make some kind of verbal queue that she wanted it. 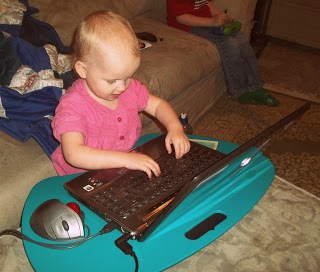 With this, she has since picked up a number of new words into her vocabulary. But we have also discovered that she is stubborn and lazy! She will find the easiest way to get what she wants and stick with it. Many days we find ourselves in a power struggle with her. She wants an snack, but instead of cooperating with us and saying the word (which we know she can say) she will scream, throw a diva tantrum (because she’s 2 going on 16!) and curl up on the floor.

It usually takes us about 3-4 tries to get her to cooperate now, and actually say at least part of the word for the item she wants. This week has been a bit frustrating as we are in the “set back” stage. She was doing very well for so long, and now it seems we’re at a stand still. At least I can look back on our progress and see that these stand still phases don’t last too long. We should be able to push passed it in another week or so.

At our last appointment; we changed our goals for Jade. Our current goals for Jade include having her be able to come to me and tell me what she wants, instead of grabbing my arms and pulling me to what she wants, points, or even throwing tantrums. Instead, my hope is that before too long she will be able to walk up to me and say, “I want a drink!” or at least say, “drink” without me having to move an inch or prompt her with questions.

The way to get this to happen is by making Jade wait even longer for the item she wants, until she says the actual word and then quickly get it for her. For example: I’m sitting in the living room and Jade wants a drink. She comes to me and starts pulling on my leg letting me know she wants something. So instead of getting up I continue to sit and say, “What do you want Jade?” I ask this a few times. If she still doesn’t say anything, then I slowly move to a standing position, but I don’t start walking yet, and I repeat “What do you want Jade?” to see if she will tell me. If still nothing, then I can start suggesting items she may want. Usually I can figure out quickly what she wants, and once I do, I then keep asking her, “Do you want___”? as I’m very SLOWLY making my way to the item. And then just like before I don’t actually get the item for her until she makes a verbal queue for the item that she wants. Once she actually says what she wants, then I move as quickly as possible and get it for her.

The point of this exercise is to teach her that she will get what she wants a lot sooner and easier, when she communicates and says what she wants, where instead the other way takes a lot longer. We want to show her that there are benefits and rewards to talking and using words.

The first week with this new exercise went very well, and I was able to get Jade to tell me what she wanted before I even had to stand up! Granted, I still had to prompt her, but I no longer had to follow her into the correct room before she would say the word for what she wanted.

But as I mentioned before, we have gotten stuck in a rut. Jade has digressed and is now resorting to tantrums instead of cooperating. I’m thinking it may have a lot to do with her new found desire to do away with naps. I’m not OK with her no longer having any naps, but for the last week and a half, she has simply refused to take a nap. I will put her to bed for her nap and she just simply won’t go to sleep. Instead she plays in her crib. But I’ve noticed a direct correlation to her “no nap” phase and her extra moodiness and lack of participating in our new exercises to get her to talk.

I’m hoping this set back phase doesn’t last too much longer, as she has also developed the typical toddler Screaming phase with her tantrums. 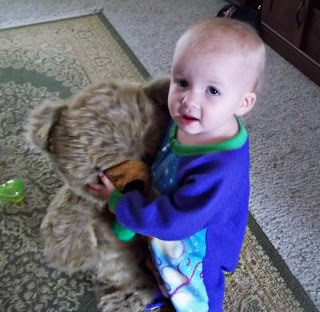 Although in good news, we had an appointment with her therapist today; and he said that she is still improving. She will now look people in the eyes when she is jabbering. She is improving by including sentence inflection in her jabbering as though she is really carrying on a conversation; we just don’t understand the words. We discovered today that she really understands more than she sometimes lets on, as we gave her a new suggestion and she up and immediately followed our directions and did it. So her comprehension is improving too. It is nice to have an outside influence that isn’t always around Jade 24/7, that is more apt to see the improvements, than myself who is in the thick of it and finds it hard to see the progress.

Our assignment this week is to simply keep doing what we’ve been doing. Encouraging her to use words and ask for what she wants before we get it. Also when the tantrums hit, the best thing we can do is ignore them and only give in to what she wants when she uses the proper communication efforts.

Have you struggled with a child with developmental delays? What have you found to work well?

First School for my Daughter, Am I ready?

[…] written before about Jade's speech delay. With her in the infant toddler program, we were hoping that she would improve and […]

[…] Sensory Processing Disorder and a very overwhelming communication barrier because of her developmental delays. Because of this, it makes learning a challenge. What a normal student can pick up and learn […]

Becoming a Mom, An unexpected Surprise.

[…] I had not forgotten how miserable I was through Miss Jade’s pregnancy. And with her developmental delays, I was no where near ready to face the ordeal […]

[…] been a while since I last talked about Jade’s Developmental delays. She has made a lot of progress over this last year. But we still struggle with many areas. She […]